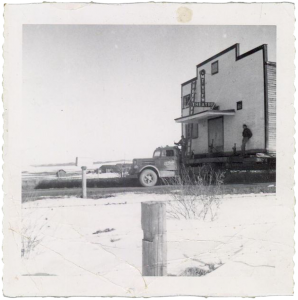 The Story of Marv’s Classic Soda Shop began in about the turn of the century, when Marvin Garriott had an idea. Not only an idea but a house full of things and several sheds full of things.

The old Mt. View Theatre was getting a face lift and this looked to be the perfect spot to put those things. This soon became the first antique mall in the area.

It seemed only natural that a candy store might fit in as well. He needed old style nostalgic candy unavailable elsewhere. With the help of the Internet he was able to locate items that have been off the market in Canada for 20 to 40 years. Beeman’s gum, Blackjack gum and Smith Bros. cough drops began to appear on his shelves.

Now Marv, being a baby boomer himself, thought back to a time when the candy store and the soda fountain presented the most delicious treats in the world. Another idea came to mind!!! If he built a counter here and moved some things there and placed an ice cream freezer there perhaps an ice cream parlour would magically appear.

Marv began serving up delicious ice cream treats from recipes found in vintage soda books purchased on the Internet as well. Along with this, he decided to come out of retirement and start entertaining again. If the opportunity presents itself you may hear him sing an Elvis song or any number of 50’s tunes. He may even lead a sing along with the nickelodeon player piano.